cottish Highland bagpipes have basically kept the same look and mechanics for hundreds of years. The instrument consists of a blow pipe through which the performer exhales the air out of the bag and into four places: the chanter where the actual tune is emitted from, and the three drones which are constantly playing one continuous note throughout the entire piece or set of pieces. The bag, which is normally covered with a decorative bag cover, inflates and acts as a reservoir for the air. The performer then puts the bag under his left arm and squeezes the air out through the chanter and the drones. 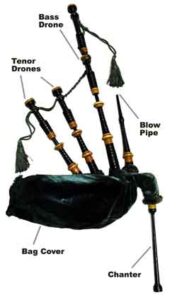 When the air passes out through the different drones or through the chanter, it passes through a series of reeds. The bagpipe is actually a double-reed instrument, similar to an oboe or bassoon.

Musically speaking, the bagpipe is a very limited instrument. It can only play nine notes. If you’re familiar with music theory at all, the instrument can play a B-flat Mixo-lydian scale; that is a B-flat major scale with a flatted 7th. The lowest note is an A-flat concert, ascending to B-flat, C, D, E-flat, F, G, A-flat and finally high B-flat. However, these are concert pitches. Bagpipe notation is written so that when you hear a concert B-flat, we actually play what we call an “A” on our scale. Bagpipe notation has no sharps, flats or accidentals. Don’t ever ask a piper who doesn’t know music theory to play a B-flat. He probably won’t know what to do!

Because of this limitation, there are a limited number of familiar tunes that can be performed. Certainly Amazing Grace and Scotland the Brave are playable tunes. Occasionally Shubert’s Avé Maria or Bach’s Jesu Lord of Man’s Desiring are requested, however these tunes go beyond the limit of the instrument and aren’t able to be performed, much to the disagreement of some piper’s out there who claim that yes, they songs CAN be played. Believe me, as a professional musician, I know very well what is possible on the bagpipes and what is not.

To the right is a closeup of a typical chanter reed. This is a double reed similar to an oboe or bassoon. It is made out of cane. Cane reeds eventually give out depending on how often they are played. A good reed, if played regularly, perhaps three to five times a week could last about a month.

The one on the left is one of the traditional cane reeds that have been used for cen­turies. It is basi­cally a hollow cane tube with a tongue that will vibrate when air blows through it. Again, these cane reeds wear out with constant playing and with age. The reed on the right is the brilliant idea of today’s pipers who wanted something more durable and lasting. The reed on the right is made from plastic, and in theory will never need replacing.

Recording Sessions:
Behind the scenes at recording sessions can sometimes be an experience, especially when the instrument by nature plays very sharp. Rule of thumb: the instrument plays approximately 11 cents sharp. In general, what is done after all initial tracks are laid down, the playback is increased in speed about six percent, thus bringing up the pitch on the playback. When the bagpipe track is laid down, the pitch should be in tune with the piper. Then the speed of the final playback can be lowered back to the original setting. Remember, if you want to compose, keep your tunes in B-flat or E-flat. With today’s digital recording technology, this process has become much easier.

Below is an behind-the-scenes recording session on the Uilleann pipes.
“The Light That Leads Me There” by Jill Freeman.